Barney, Scott, Liz and I met outside the French bakery near to work and weaved our way out of the city. At 6.00am the monster is slowly waking, but Hanoi’s roads are still peaceful and calm before the hordes descend

It’s hard to differentiate exactly where Hanoi ends. At some point open fields appear next to the roads. But you are quickly swallowed up by what may or may not be the bastard love child of Hanoi. Close enough to be part of it – but still kept at arm’s length. Confusingly the addresses on businesses seem to carry both a new town’s name, as well as Hanoi’s.

On the roads out of the city, a process begins to be repeated. A series of small dusty little towns that seem to have very little to offer other than their furiously busy main road plowing through their hearts. They are broken up with busy stretches of road.  Buses tear past you at break neck speed – the conductor shaking their fist in fury because you dared to share the road with them. It comes to a thunderous halt at a bus stop. People are ejected from any available hole and the bus swings wildly back into the road, regardless of if anybody is currently occupying that space. It is not uncommon to look up at the road to find to find two vehicles hurtling towards you. The dividing line in Vietnam is merely a suggestion. The maniac now bearing down on you sits hunched over the wheel, his fiery eyes actively looking for targets. The car horn surely must be broken because it is in a constant state of ‘on’. If your really lucky he might even flash his lights at you. With Teeth clenched you point your motorbike into the tiny gap that the monster is permitting you. Euphoria of still being alive is quickly extinguished by another act of highway savagery. It is exhausting.

After two hours Scott seemed to snap and flew past me, his eyes wide, screaming something about coffee. We pulled over, glad to be out of the firing line.

We had been told of a scenic route that would take us off the main highway and through the limestone crags that we had began to see rising out of the rice fields. Within minutes of turning off the experience was transformed. The carnage of the main road was left behind and we began riding sedately through a Vietnam that was exactly how you dreamed it would be. Rice fields glowed with a luminous green – the traditional conical hats of those tending them bobbed among the color. Limestone towers powered up from seemingly nothing. Stilt houses began to appear, rickety old weather beaten buildings that looked like they could have existed hundreds of years ago.

We stopped for Bun Cha in a small town. The road then began to climb steeply, culminating in an odd little market at the top of the pass – blessed with stunning views and one albino squirrel in a cage. The scene’s soundtrack was the terrified screeching coming from a tiny piglet tied into a wicker basket that lay in the baking heat – foreigners stared horrified at it – a young woman wandered slowly over and covered it up with a plastic sheet – merely muffling its frantic screaming. The road hugged the steep cliffs above. I began to calculate the odds of actually  being hit by a rock from above – like the ones that lay strewn along the road. It figured it must be small. If you’re hit by a falling rock while travelling at 60 km an hour, on a ten mile stretch of road – I guess it’s just your time.

As we wound down the hill Mai Chao came into view. Nestled in such a sumptuous surrounding the town itself wasn’t much – similar to any another town we had travelled through that day. We stopped for a few beers than made our way to Ban Lac – one of the nearby villages populated by the White Thai.

The village consisted of stilt houses, lined neatly and orderly like some suburban planners dream.  It is a well oiled machine. Every house doubles as a guest house upstairs then as either restaurant or souvenir shop downstairs. They are so uniformly similar it easy to lose your bearing even in such a tiny village. The down side is that it creates an almost sterile atmosphere. Everything you could want as a tourist has been conveniently pushed together. It’s nice, it’s easy – but it lacks any sense on individualism. A little too nicely polished – but the people all seemed warm and friendly. 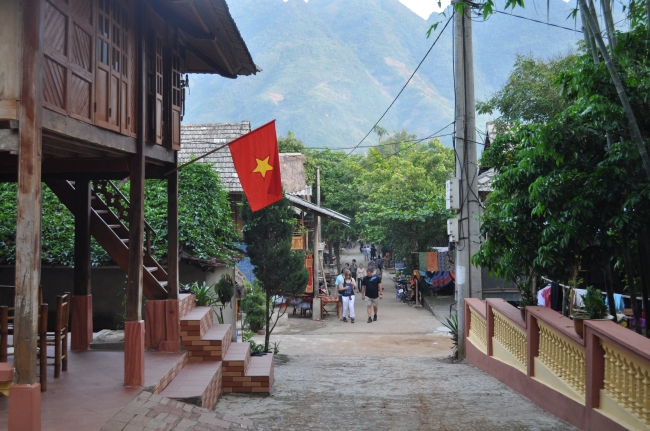 We chose our house and were welcomed with some tea – and a poster declaring ‘if you’re here for sex with children – everybody is watching you’. The poster was strangely juxtaposed by an enormous photo portrait of an oddly satanic looking child on the opposite wall. I wasn’t sure if this was some sick test.

Each of us was facing varying degrees of sunburn,  but we braved the heat again and went for a walk among the rice fields. Tiny pathways  criss crossed the fields  – ranging from solid earth to flip flop devouring wet mud, that I’m sure small children have been lost in. We passed locals intermediately who smiled slightly oddly at us – as you probably would if you came across a comically orange foreigner stumbling pathetically lost through mud and water in your rice fields.

That evening we sat drinking beers overlooking the fields. A local man who was a bewildering mix of drunk, excitement and irritation began speaking to us. He was obviously  pioneering a version of Vietnamese English that left us baffled. Perhaps every tenth word had some possibility of being understood. Two we managed to decipher were: 8 o’clock and fire.

As we paid our bill we were pointed in the direction of a faint drum beat. Darkness had fallen as we made our way out of the village. The tiny road was busy with people going in both directions. We began to see lights up ahead of us. Another small village lay at the end of the road but before it was a field, eliminated by several small bonfires. Large crowds gathered around them, or mingled between. A cheap sound system pounded out a beat that may have originally been music.  We clambered down the embankment and joined the festivities. A group of teenagers were playing a strange hybrid of tug of war and possibly rugby. The rules seemed vague but pushing the other team to the floor seemed to be the basics – with extra points for injuries. It looked terrific fun and reminded me of the four days in secondary school were we created and played ‘murder ball’. Our teachers failed to grasp the brilliance of the ‘sport’ and it was quickly banned. 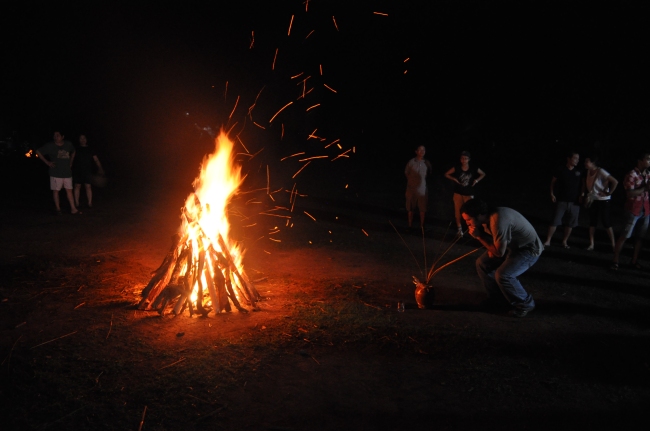 We joined a group gathering around a newly lit fire. A circle began to form and we were hastily conscripted into it. We all held hands as the circle began to twirl manically around the fire.  Every ten seconds or so everybody would charge towards the fire, stopping just short, and retreating. This was repeated time and time again. A communal jug of honey wine stood close by acting as refreshment. The eight straws were quickly taken up, but one was always made available for one of us. The fire, the music, the alcohol – it was intoxicating. The whole scene carried a wonderfully macabre ritual tone – I saw flashes of The Temple of Doom. I would not have battered an eye lid if a virgin had been brought out to be scarified. To be honest I was a little disappointed nothing materialized. Come on guys can’t we at least do a goat!

The blood lust passed. We spent a little time watching a group of traditional dancers going through the routine with so little enthusiasms, that I would suggest they were only doing it because their children were being held close by at gun point.  Before we could really comprehend what was happening -the party was dying.

We wandered back down the road, our heads dizzy with beer, honey wine and unsure of exactly what we had just attended. 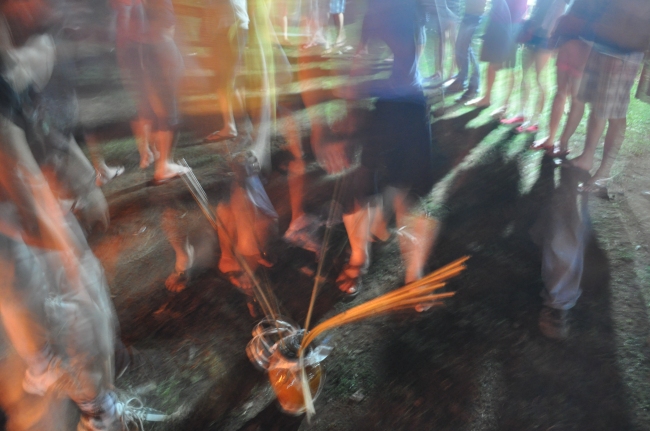