The few times I have began to write about the roads in Hanoi, I have to stop myself after two pages or so of rabid rantings – usually concerning what I would like to do to Hanoi’s taxi drivers with a blow torch, a stern length of barb wire and a sledge hammer.

A concerted effort at a more balanced approach was needed.

There is nowhere in Hanoi that quite encompasses the bewildering contradictions of Vietnamese life, than on its streets. The good, the bad and the ugly is hopelessly inadequate. The vast and distance components of human emotions are quickly rolled together, and smacked into your face – at speed.

The streets drip with life. They are the playgrounds, the restaurants, the shops. They are the meeting places, the car parks – even my local dentist seems to be open planned. The young man having the root canal adventure of a life time is invariably only five or six meters away from an open door, and the people who have gathered outside. This is no place to squeal like a baby. 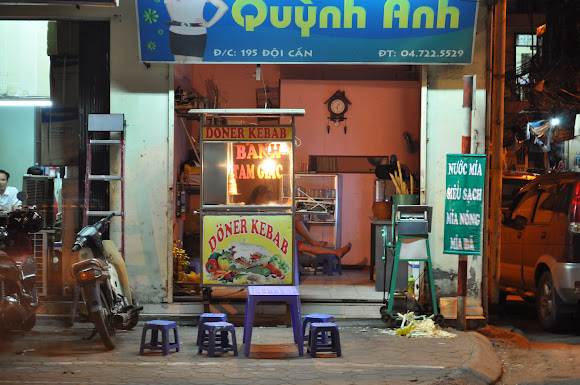 Doors are flung open, cafes, businesses,  bars – even homes. Lives are conducted on the streets. And it’s quite a show.

Perhaps Hanoi’s best kept secrets are the cities ngo’s – tiny alleyways that dissect the roads at almost every turn. Standing on a main road you peer into a dark cavernous maze that twists seemingly into the very heart of the city. Mercifully too small for most traffic, they still manage to cram anything and everything into them. The walls loom up high, meaning light is often scarce. This is where the majority of Hanoi’s population resides. Within twenty steps you can take in the belligerent screams of a child at dinner time, an improbably awful man singing karaoke in his house, on his own – at the top of his lungs – and the silent gaze of elderly women gathered conspiratorially outside one home. Eyeing you in the way I thought reserved for zoo animals. Often merely used as a means of one main road to the other – they are best explored on foot.   Perhaps you will re-join a main road – maybe your adventure will finish at a dead end. But that’s the fun – they are apologetically real.

Mornings are best to appreciate Hanoi’s road culture. A blurry eyed bowl of steaming Pho, followed by a leisurely ca phe – and Hanoi slowly cranks into life.  Smells drift nonchalantly back and forth – morphing this way and that. Tofu grilled on tiny curbside fires mix with the ca phe – while the fish sauce stalks your every move.

Large groups women perform exercise routines to thumping techno music, in a manner that I am yet to find the words to describe. It’s certainly different. The early morning vegetable seller with their baskets balanced on a wooden beam bounce along the road, searching for customers. Their iconic conicle hat tilted ever so slightly upwards. Sweat beginning to drip down their face.

It is one of those wonderful scenes that you can happily sit and watch for hours. 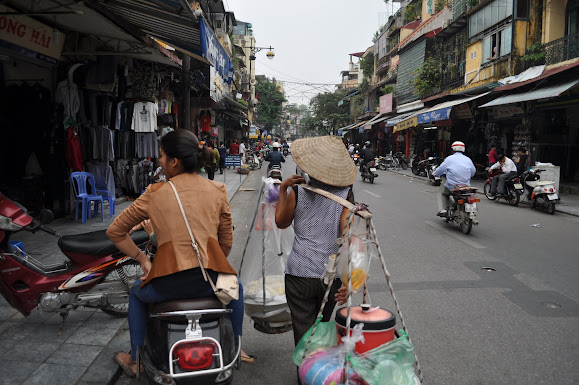 But there is a dark side….

It is one of those unfortunate conditions of life, that perfection is rarely realized. It is impossible to have a city that is so wonderfully interesting and full of life without seeding some concessions.

The usual patience and often languid pace quickly disappears. It’s strange how life on and off the road can take such drastically different courses.

Perhaps one of the great mystifying sights is a lone ranger plowing through a red light into hopelessly thick traffic crossing the other way – predictably fucking everything up. Suddenly others start to inch forward. Mob mentality slowly rumbles. The ‘hero’ is barreling his way through, knocking people this way and that – and suddenly – he’s through. People glance up at the light. Still ten seconds to go. The victor speeds down the road – he’ll be able to add on an extra thirty seconds to his three hour nap at lunchtime. It’s too much for many to bear. Others go for it – then more. Suddenly everybody charges forward – of course those going the other way still have a green light. So the gloriously ridiculous sight of fifty people attempting to untangle themselves from the mess in the middle ensures. Everybody thinks they’re right. Nobody backs down.

When I arrived I was told that the constant ‘beep beep’ is used to alert people to your whereabouts – acting as a safety measure. I will contest this. If every car/motorbike horn in Hanoi magically failed at the same time, what you would see, and hear, would be people craning their necks and screaming “Get the fuck out of my way” to anybody that came within a ten meter squared radius. It would work in exactly the same way. 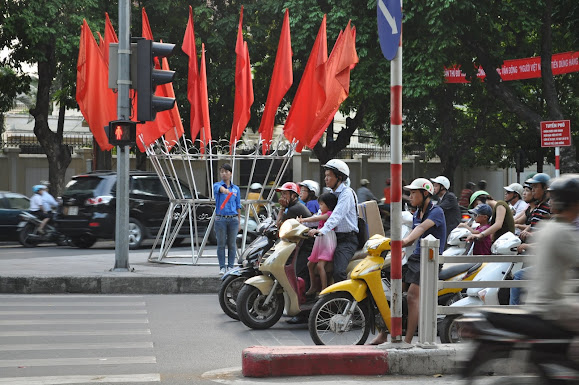 So why is it so bad? It’s a sad reality but selfishness plays an overwhelming role. When you have hundreds of thousands of people who simultaneously think they are the most important person on the road you are bound to run into problems. You regularly see one person do something that will invariably have negative effect to another ten people. You times that by ten – and you have hell.  Driving standards – and standards is a loose expression here – are perhaps not what they should be. The Grand Theft Auto School of driving seems to be doing a thriving business.

Perhaps worse of all – Vietnam, like every country in the world, has its fair share of people suffering from ‘shit head syndrome’. A particularly debilitating disease that causes the sufferer to lose any sense of morality. They may take your life in their hands without even a flicker of thought.  This may sound a little strong – but I don’t care if they die. I don’t know them. If they want to travel at break neck speed, without a helmet – the wrong way down a street – they are voluntarily numbering their days on this Earth. That fine – actually couldn’t care less.. But the second you put me in danger because of it – we’ve got problems They are incredibly stupid and incredibly dangerous. These people should never be allowed operate anything more complex than a child’s rubber duck. 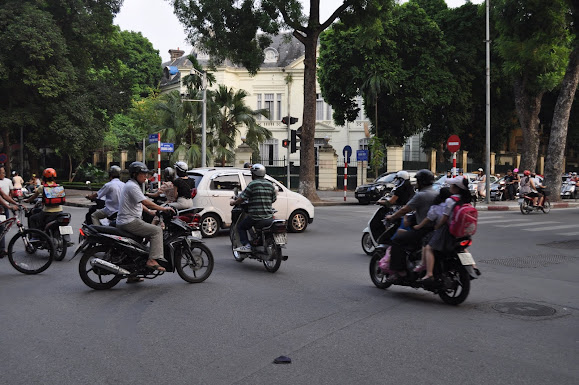 When you consider that even twenty years ago there were very few cars or motorbikes; it is safe to say Hanoi is not yet equipped for 21st Century volumes of traffic . The fact that giant American style 4×4’s are being introduced only exasperates the problem. Long boulevards are punctured with turning areas for those coming in the opposite direction. This invariably causes chaos; as one or two cars attempting to join the stream, do nothing better than bring everything to a standstill. There is much scratching of heads, building of overpasses at astonishingly fast pace – and the impending sky train – which should be ready in a few hundred years or so. But the problems seem to growing.

There are days when I ask myself – Am I just too western? Have I become horribly safety conscious that I balk at even the smallest of infractions? The answer probably lies, as it usually does, somewhere in the middle. I think back to England; and lines of orderly people moving about their lives – in cars, obeying every aspect of the law. It seems horribly dull now – even sterile. Safe – yes. Interesting – not so sure. I really enjoy the fun of riding a motorbike in Hanoi, and being able to bend the rules a little. Maybe the Vietnamese have it right. They live their lives closer to the edge. They take risks but isn’t that what life is for? Then I look up and see a mother carrying two small children shoot through a red light  – missing an oncoming car by inches – and I cringe – well – maybe not.

Maybe the Western world has gone too far. On the other hand, the mindless stupidity you see every day on the streets of Hanoi is enough to make you you question humanity sometimes. Surely a happy medium can be found somewhere.

The search for that elusive line between really living a life, and not unnecessarily increasing the chances of it ending early – or indeed not  fucking up everybody else’s life around you – goes on 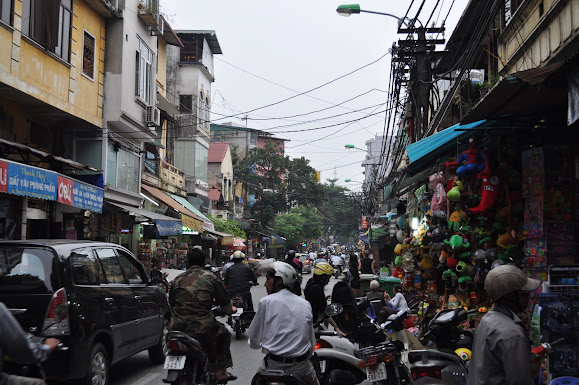