The line that greeted us on Copacabana beach stretched so far that we didn’t even bother finding the end. Instead we nestled ourselves in front of the second screen. The crowd was still thin – but overwhelmingly Argentinian. A lone German stood proudly behind us in his speedos, a German flag fluttering gently beside him.

The streets next to the beach were closed, and now filled with people. Argentinian flags flashing through the air. The same catchy song being bellowed, almost on repeat – we quickly discovered it was mocking Brazil.

As the hours before kick off ticked by, the crowd increased, two fold, then three, then four – it was impossible to say how many people were there – we guessed 20,000. The numbers of Germans increased, but they were constantly drowned out by the Argentinians – instead they gathered in a small pocket behind – every now and again a German would be spotted walking like a lost child through the blue and white sea – they were mercilessly booed, but usually in good nature.

The game kicked off at 4pm. The beautiful blue sky began to slowly slip away – replaced with a warm orange as evening settled in. The crowd roared, then settled into a nervousness appropriate for the occasion.

Argentina scored – or so they thought. The sea erupted in delight. Bodies flew through the air, crashing into each other. A young woman in front of us crumpled under the weight, crashing to the floor with people on top of her – she did not return after half time. I haven’t been in a situation like that since I saw Slipknot play when I was eighteen. The celebrations went on twenty seconds after the screen had shown the linesman’s flag raised – a disallowed goal. The Argentinians groaned in disappointment – their anger bubbling under the surface.

It was an anger that seemed to grow throughout the game. As more and more drink was consumed, legs became a little less steady. The abuse being hurled towards the Germans became more and more viscous. One awful human being stood next to us, turned every few minutes to slur something that I’m sure wasn’t lost in translation. He would later piss on the sand, whilst steadying himself by holding a nearby friend – who looked suitably unimpressed.

Both sides had chances, but neither could convert – the game moved into extra time. Germany where now clearly the better team, the Argentinians being pressed further and further back. Penalties were quickly approaching.

Then it came. Mario Gotze collecting the ball wonderful on his chest, swivelling and stabbing the ball goal-ward. Everybody froze. The ball flew into the far corner, Germany had scored. The small pocket of German fans went wild. The overwhelming majority stood in shocked silence.

The German voices could now be heard. A small fight broke out behind us, but was quickly broken up. Seconds ticked by. Germany where now minutes from glory. Then suddenly carnage unfolded. We turned to see Argentinian fans charging towards the Germans. Fights broke out again, but both sides seemed to quickly retreat – leaving a huge circled battlefield littered with possessions just behind us.

The Germans had pushed further back, eager to escape. They were now replaced with groups of Brazilians, taunting the defeated Argentinians.  Both sides were now hurling whatever they could find at each other. Chairs, bottles – anything within reach. I watched a chair sail through the air and slam into a man thirty meters away.

We scrambled around in the sand, desperately trying to find our belongings, before pushing through the crowd – half of which seemed desperate to escape, the other half where eager to join the fight. There were so many people, that a stampede seemed a very real possibility. Thankfully most people stayed calm, and moved quickly towards the street.

We stopped at the edge to regroup. The chaos still unfolding behind us – a smoke canister was thrown into the crowd further down the beach, it wasn’t clear from whom as there were no police in sight. It had been a truly awful few minutes.

We staggered out in the relative safety of the streets and walked down the nearest side street. Behind us the big screen showed the celebrating German players – I felt horrible that their fans had had this moment ruined by utter thugs.

As we made our way away from Copacabana the police sirens slowly began to start – cars hurtled past us. It would be a busy night dispersing the area – but their presence had been horribly inadequate.

And so it ended 64 games played. Scattered far and wide across Brazil. 171 Goals. The best ever World Cup? Quiet possibly.

The best team unquestionably won. Argentina had scraped unconvincingly to the final. Germany fully deserved it. The World Cup was an extraordinary experience. A stack of goals in the group stages – followed by much cagier, knife edge football in the knock outs.

Filled with wonderfully memorable moments, last minute goals – heroes and villains. James Rodriguez electrified the tournament, and it was heart breaking to see Columbia knocked out by the thuggish Brazil. Costa Rica took on the World and were only denied a place in the semi finals by penalties. The U.S shuffled nervously towards actually liking soccer, helped by an unforgettable Tim Howard performance against Belgium. Plucky Algeria battled the Germans all the way to the end of extra time. There were so many heart warming stories.

Spain were truly horrific, and in the end so where Brazil. Quite astonishingly Luiz Suarez bit an opponent for the third time in his career, and Uruguayan reaction rendered them a complete laughing stock. England burned brightly for about forty-five minutes then reverted to true form.

As for the question of should Brazil have staged a World Cup – that’s not a question I can answer – it was unquestionably a success, but this is not my country, and these are not my problems. I do know that almost every Brazilian I have met has spoken about debilitating problems in education and health care. It is a problem that is raw, and one that is not going to go away – especially with the upcoming Olympic in 2016.

But for the majority of the time we felt a world away from those problems – it’s easy to get caught up in the frenzy. A couple of days after the final I was walking home at night, through an affluent neighbourhood. Seeing people rummage through rubbish bins is not rare sight in Rio – but on this night I saw a small girl, who can’t have been more than five tearing apart several rubbish bags – her horribly drunk mother staggered backwards and forwards behind her, before seeing somebody she recognized and running across the road. The little girl quickly looked up and scampered after and out of sight. I looked around me, people were walking in all directions – nobody bat an eye lid. This is a country who is in the midst of spending potentially $1 trillion to host the worlds two biggest sporting events back to back – it all suddenly seemed utterly ridiculous. The World Cup was utterly amazing – but it’s easy to think like that when you have enough to eat – only the Brazilians can judge if this is a fair price to pay.

But in terms of football – a unrivalled, magnificent show. 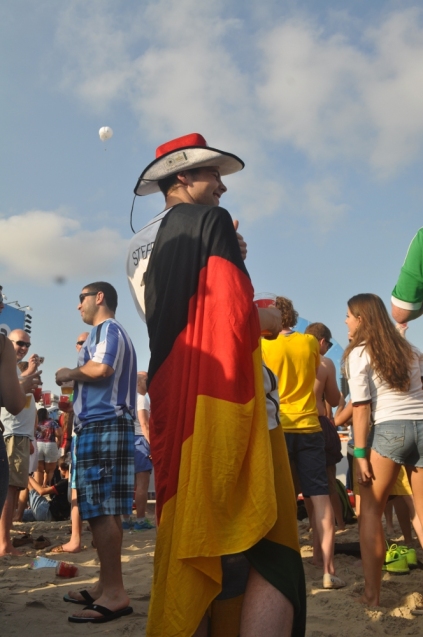