The End of the world

I thrust my hands deep into the coat pockets, a refuge from the biting cold. The Beagle Channel stretches before me. A fierce, angry wind growls in from the sea. Great hulking ships sit dormant in port. Monsters of nautical travel – ice breakers – Antarctic ships. The frozen continent lies a thousand kilometers to the south. Bronze busts of past explorers line the waterfront, staring whistfully out to sea. I have no idea who any of them are – but if their clothing, steely gaze and sensational facial hair are anything to go by they were quite something.

I have been in Ushuaia for three weeks. Stranded, caged – marooned. The result of waltzing away from an ATM machine without retrieving my debit card first. A replacement was making the slow, agonizing journey from England. I wasn’t entirely sure how – but judging by its speed I suspected by donkey. There certainly could be worse places to be stranded. Stevenage for example, or anywhere in Nebraska. Nevertheless I was sure I was only days away from complete insanity.

Ushuaia sits at the far southern extremity of Argentina, on a small island evocatively named, Tierra del Fuego – The Land of Fire. A name given by the first European visitors seeing the frozen land alive with the fires of native Yaghan tribes. Today the Yaghan are long gone, and so are the fires. The snow has certainly remained. Pressed tightly between the Martial Mountains and the Beagle Strait – effectively ringed by snow-capped mountains – the town’s setting is quite extraordinary. It has long been romantically dubbed: The End of the World. 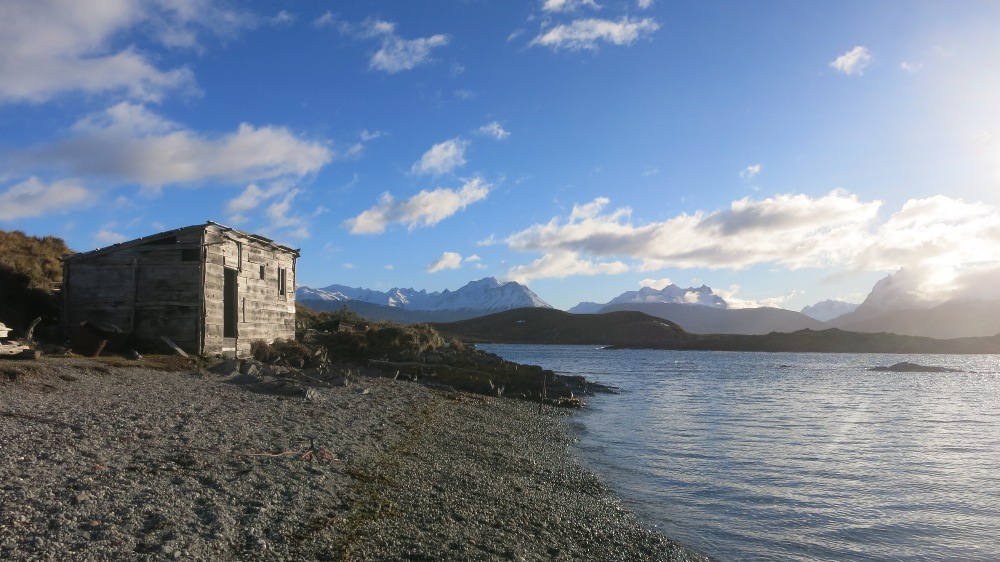 My days have taken on a groundhog day repetition. Icicles greet me on the outer walkway as I rush quickly into the cozy warmth of the kitchen. The Antarctica Hostel has become home, which despite its name, is pleasantly heated and filled with warm agreeable people. I breakfast at 8am. A large coffee, with cereal, followed by some toast, and a second coffee. Always in that order. Occasionally I consider altering my system – but I fear what might happen.

Sunrise is late this far south. A little before 10am the uniform grey sky begins to evolve into vibrant blues, and clouds burst with a candyfloss pink before settling into a deep rusty orange. I wrap myself with excessive layers, strap a backpack to my shoulders, and venture out into the blustery world.

A yawn escapes me – it’s long, and deep – I savor every moment of it, stretching my arms to their limits. A powerful gust of wind snaps me out of bliss. I shudder violently for a few seconds until it subsides. And so begins my day.

I approach the port, and pass the angry, ranting sign with an enormous cross through a Union Jack, and words to the effect of ‘No English Pirates’. The Argentine government has again begun to beat the old war drum over their claim to the Falkland Islands.

The Saint Christopher, known as HMS Justice in a former life, appears; a small, forlorn ship run aground in 1954. She now acts as a monument to the regions many shipwrecks. It sits lonely, and dejected on a sand bank, black birds littering the wreck – standing guard. They remind me of the ravens at the Tower of London. An insane man might well believe they never leave their posts, as they always seem to be in exactly the same spot. But I assume they’re simply on some kind of shift rotation. They eye me suspiciously as I walk past. A true Hitchcockian nightmare

The flaming torch of the Falkland War memorial flickers opposite the ship. The names of the 652 Argentine lives lost during the six weeks war are solemnly listed below. A series of pictures portrays the story, which is clearly unfinished. It speaks of a war that lasted only two weeks, and was a resounding success for Argentina. There are no pictures of the bitter fighting in the final month. There are no pictures showing the horribly ill-equipped, but brave Argentine men surrendering on June 14th 1982.

The town begins to widen. A tiny slither of land cuts a small lake off from the harbor. A broken, muddied road runs along it and up to the naval base. I walked there once, and was fiercely rebuked for taking pictures of an old plane sitting ceremoniously outside. A large man with a large gun looked dementedly enraged, his eyes bulging, his face contorted in a manner that generally either accompanies war, or horrendous constipation. I’ve since developed quite a real fear of being water-boarded as an English spy. I avoid the naval port these days. I’m not entirely sure what I would say under torture.

My path diverges here. Sometimes I walk through the residential area of the town and onto the old train line that snakes through the pine trees, winding up into the hills. Inmates of the now closed prison were once brought here to collect timber in freezing conditions, a most awful punishment. Sometimes I amble along the trail, occasionally I tackle the hill that borders it. What begins as a pleasant stroll quickly becomes a treacherous climb which involves hauling myself up and over sheets of ice. If I was honest with myself this will be extremely dangerous to return over. I’m always honest with myself – but I rarely listen.

Recently I saw a wolf in the woods. The beast stood motionless ten metres from me. Its shaggy gray fur speckled with snow, its eyes deep blackened moons. We greeted each other with the same look of shock and disbelief. Our eyes remained locked for a several seconds. I feared war was moments away. Thankfully it ran away first, which I took as a small victory, but promptly ran the other way.

Sometimes I clamber up the abandoned ski slope that tumbles down the mountain side just outside of the town. The reward for the tough, slippery climb to the summit is instantaneous. The world sings gloriously out to the horizon – and into a different country. The small town of Pueto Williams, in Chile, lies across the cold motionless water. The southernmost town in the world is the last stop before the foreboding Cape Horn.

The forest stretches back a mile or so from the ridge, before hitting the mighty wall of the Martial Mountains, which tower up with a giddy steepness, finishing in anger somewhere near the clouds. On my first visit to the area I sighted a cross country skier moving quickly towards me.

“Hola” I hollered as he approached. He glared at me and shot past without a word. I watched his agile shape disappear into the distance, trying to pretend that I wasn’t more than a little hurt.

When I grow tired I head for home. I always walk along San Martin, the main business street. Shops pack closely together – it still has the feel of a traditional main street, but the few upscale boutiques hint at what the future may hold.

I expected something much more basic than what I found in Ushuaia. The ‘End of the World’ brings visions of a wilderness hardship. San Martin has a brisk prosperous feel to it. Just today, for no other reason than the sad slow demise into insanity, I was gazing aimlessly into a shop window which seemed solely dedicated to taps. You may think, as I did, that the end of the world might well be satisfied with the one tap – at a stretch two – but no. I counted, then re-counted fourteen different types of sink taps, all of which looked roughly identical to me. Each came complete with a cheery, slightly exotic name – Ashia, Marta – Liberty. If a society is ever to be judged on taps, I suspect Ushuaia will do rather well. 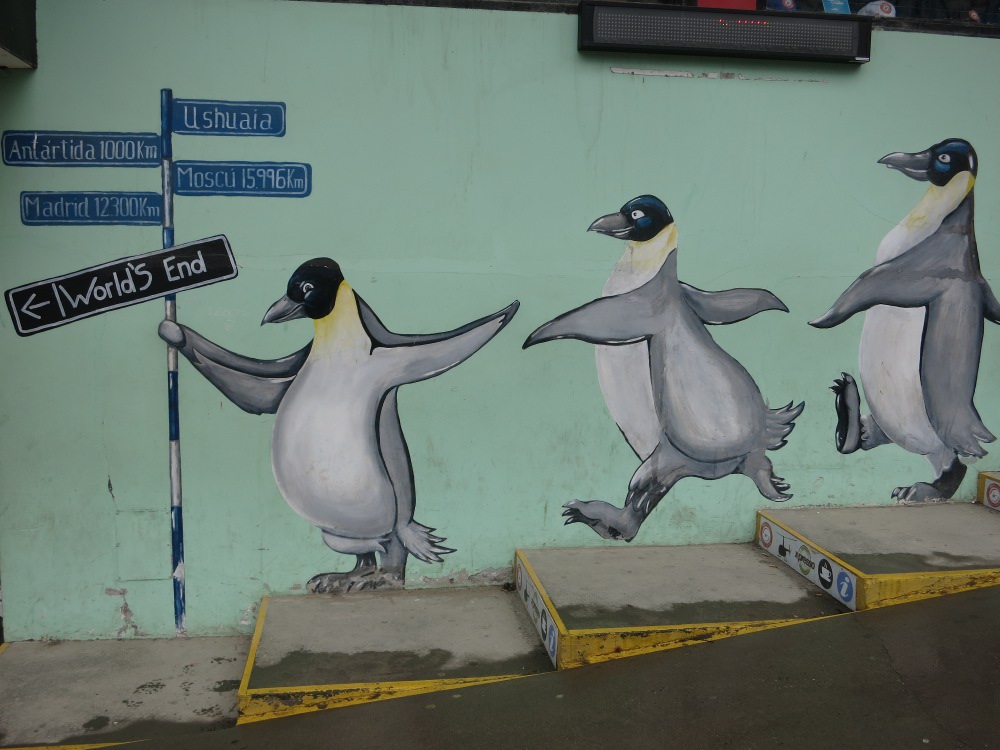 The communal area in the hostel is busy. The bus back from the ski slopes has just returned, disgorging people with that healthy glow that comes from a day on the slopes. Among them, the Brazilians I am sharing a room with beckon me over, but I have my usual business to attend to first. I walk to the front desk with both hope and resignation.

“Any post for me?” I ask Carla behind the desk. She used to try and vary the way that she would let me down. Now she just shakes her head sadly.

I usually take a stroll in the evening to work off dinner. If said stroll becomes a little strenuous, and I happen to work up a thirst, I stop at a local bar. I’ve become very fond of the El Almacen de Ramos General, a wonderful warm and homely old style bar. Filled with antique knick knacks, such as ancient train sets, and elderly typewriters. My inner child begs me to play with them. Sadly all of them come with a stern little sign informing people like me not to touch them.

They know me there now. I’ve stopped pretending that I was planning on sharing that litre of beer with a friend. In turn they have stopped looking at me in the funny way that you look at a man sitting alone in a bar, on a Tuesday evening, consuming beer delivered in a large jug. Sometimes I go a little wild and order another – because let’s face it – it’s not as if I’m going anywhere tomorrow. 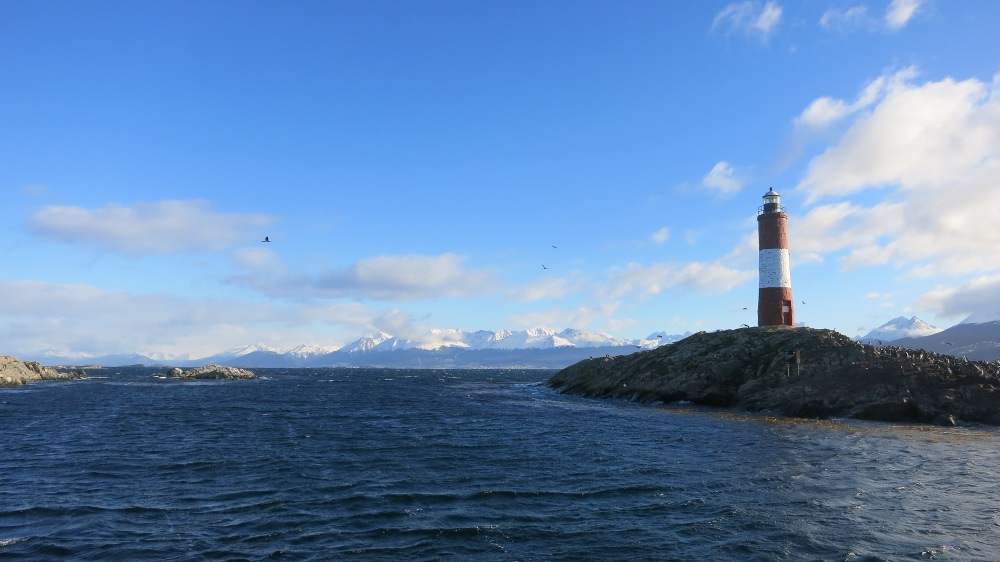