In the grand scheme of a walk, it would be a little longer than a pleasant Sunday morning stroll. The Camino de Santiago, a thousand year old pilgrimage route, would take me from the edge of France and across Spain to the famed cathedral of Santiago de Compostela. A little less than 500 miles.

I bounded out of the quaint little french town with a salivating enthusiasm. The sun was shining, a perfect blue sky beckoned me towards the glowing french hills. A wonderful day to be alive.

That was how I had imagined it would begin. In fact I stood in a drab empty car park, surrounded by a penetrating fog that cloaked the cold frigid world. The enormous backpack cut painfully into my shoulders already. Twenty minutes before a perfectly groomed German had taken a withering glance at my backpack, his lips curling into a perfect Alan Rickman from Die Hard sneer.

“You vil never make it viv zat bag” he mocked, in a disparaging tone usually reserved for Bond villains. His words now echoed through my brain.*

My 500 mile walk had begun ten minutes ago – and I was already lost. It was less than glorious beginning.

*Note – Not to give the game away, but  I would not only make it to Santiago with my bag. I would beat the smug German bastard by a full day – Insert standard Brit crossing the channel to give old Jerry a good hiding joke – Should you wish.

*Note 2 – I also came became friends with the smug German bastard – but now I’m getting ahead of myself. 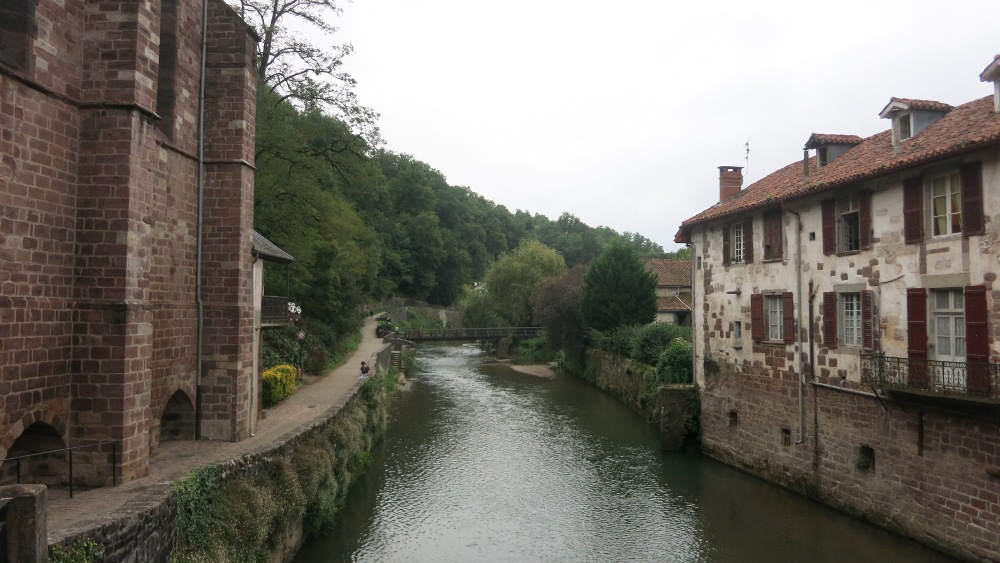 I scanned my surroundings, turning slowly in a complete circle. A tiny path disappeared through the trees. As much as I wanted it to be the trail, I knew it’s wasn’t. I sloped pathetically back down the hill.

“Camino?” I quiz a man unloading his car. He erupts into laughter, and slaps me wholeheartedly on my shoulder – my body teeters dangerously to the left. I do not find it as funny. He babbles away in Spanish while pointing down the hill, I nod vigorously pretending to understand. Within minutes I join the slow stream of pilgrims walking out of St Jean de Pied Port. I never mention a word to anyone about walking ten minutes in the opposite direction. 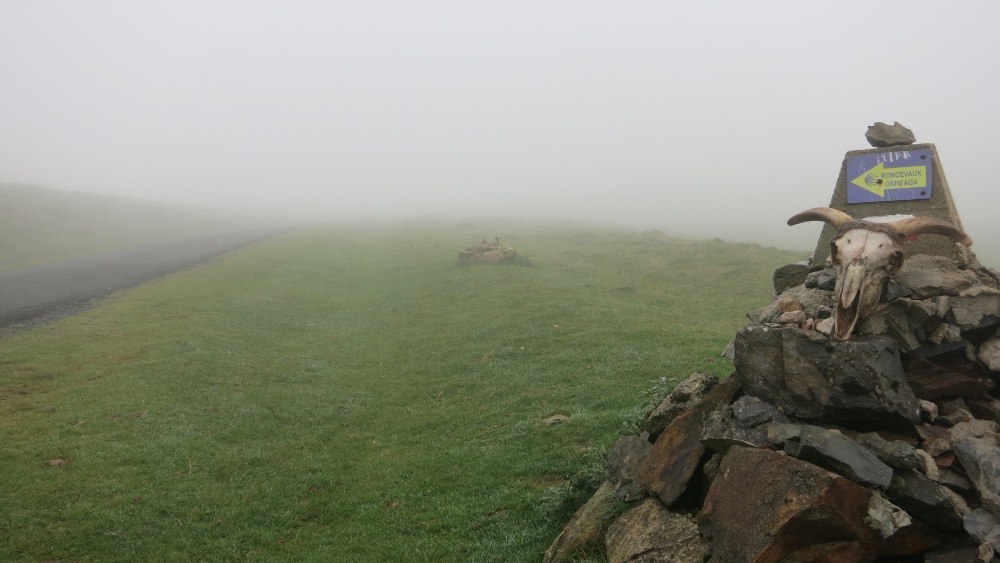 The sun briefly appeared, bathing the countryside in a healthy early autumn glow, but as I climb higher the fog thickened. I’ve heard wonderful tales of the spectacular views of that first day  – I wouldn’t know. I climbed the Pyrenees surrounded by a impenetrable wall of grey. The twinkling bells of the unseen sheep often the only sound.

I sat with a relieved slump at the summit. Seven kilometres separated me from my bed for the night.  People relaxed all around me – exhausted, but all with the same invigorated gleam in their eyes. Opposite me sat a woman with a tangled rage of thick black hair. She was dressed in jeans and a tank top. A tiny bag sat beside her, a half full bottle of wine nonchalantly tucked into the side pocket. She was striking not only because of her beauty, but how wonderfully out of place she looked. 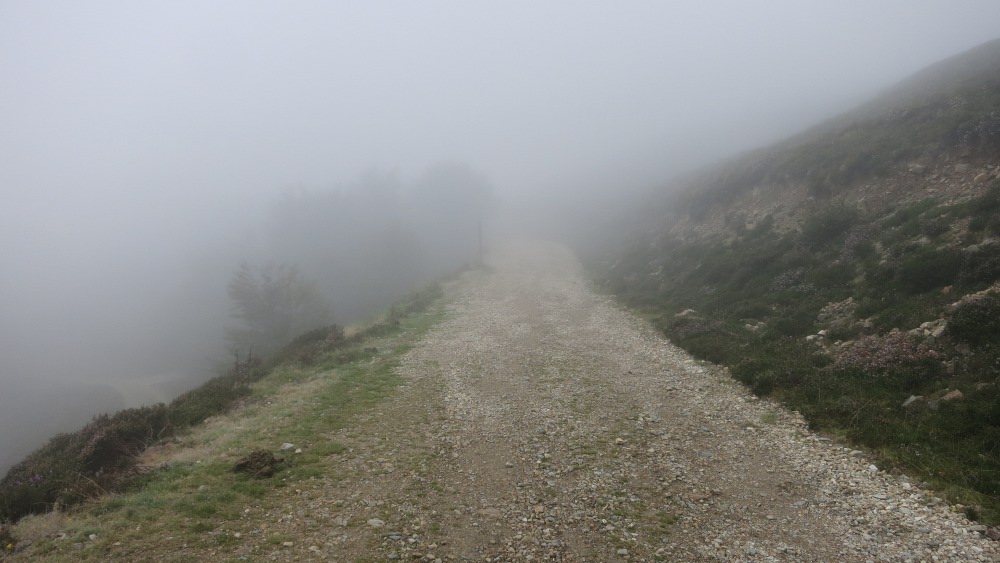 I fell into step with this odd looking creature as we continued on. Her name was Nadine, born in Lebanon, but brought up in the US. She was accompanied by two French women, Michelle, and Laura, who she had met the day before. We all clicked immediately, and spent the next hour walking together. Seven hours after my infamous false start, we stumbled into the monastery at Roncesvalles – where we were herded into an enormous room that would sleep 150 that night. 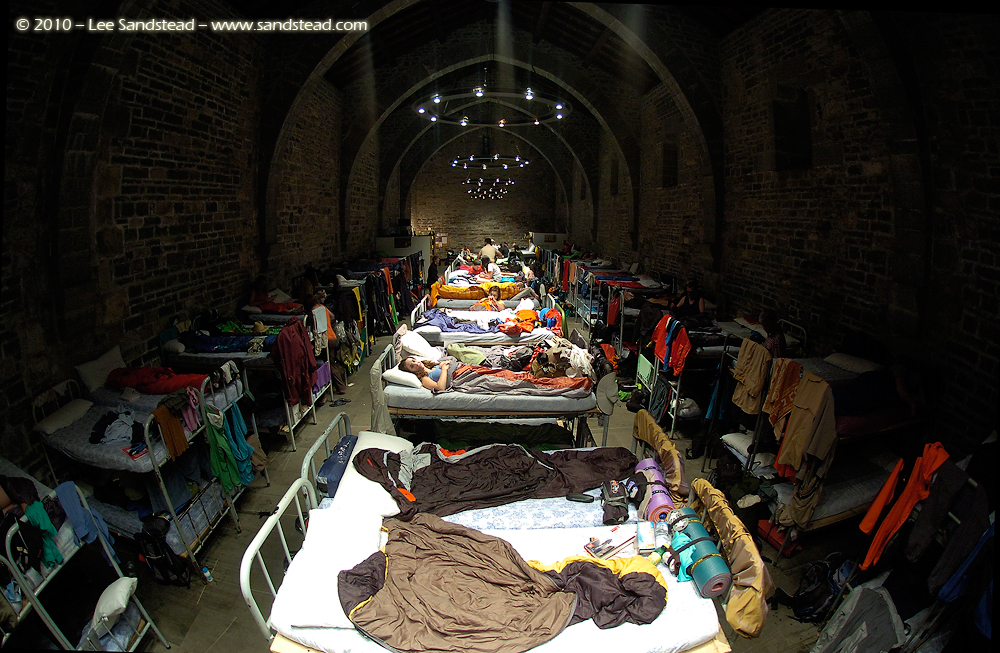 “These are the rules” the fierce matron bellowed at us, while we stood a few meters away. “There is no dinner here, there is no breakfast. The lights will be turned off at 10pm, and the door will be locked at 10pm” she finished with a rising fury and an evil smirk.

We ate that night at a nearby restaurant serving a pilgrims meal. For €10 we gorged ourselves on bottomless spaghetti bolognese and an equally endless stream of red wine. There were some who thought it best to go easy on the wine considering the mileage the next day. My new friends and myself were not among these people. Despite the tiredness and the aching legs everybody spoke excitedly of what was to come. We scurried back through the door marginally before 10pm, with the matron looking deeply disappointed. 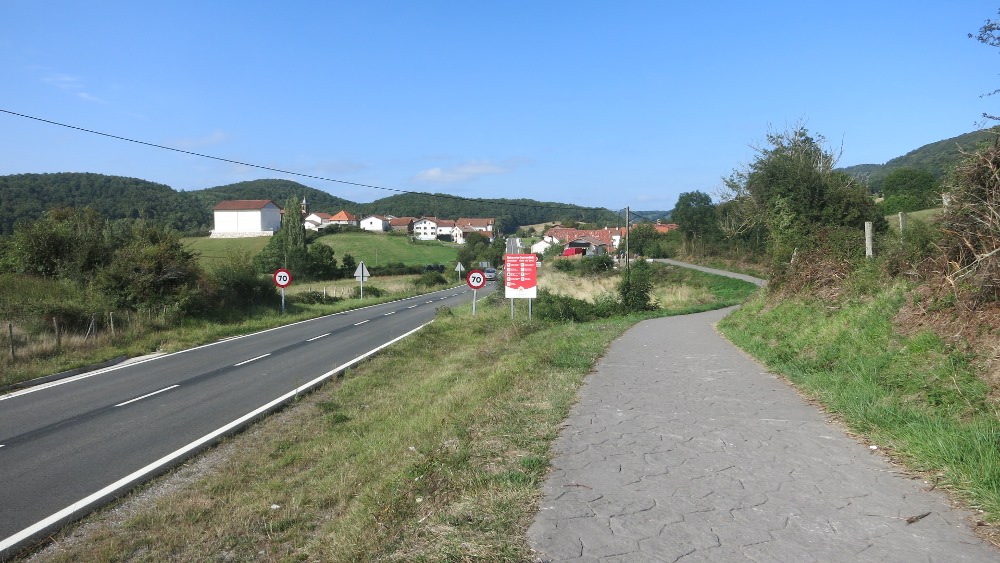 I was due to start a job in Sicily in thirty days. It would mean keeping to a vigorous mileage every day – I was already behind. On the third day while moving at a speed that would have shamed a donkey and trailing my hand through the corn stalks next to the path, I made a decision. I wasn’t going to rush. I would stop for coffees – for wine, for beers – stop to explore old churches. Spend an hour with my feet in a stream, soaking up the Spanish sun – for no particular reason, except, fuck it – I can. Drink late into the night with new friends, then wander happily at my own pace through the Spain. It was all too good to do quickly.

We entered Pamplona, the legendary, beautiful city that would welcome the rampaging bulls in six months time.The wine flowed freely that night (it always seemed to) and we laughed those exhilarated laughs that comes from walking 70 km and being handsomely rewarded at the end of it. 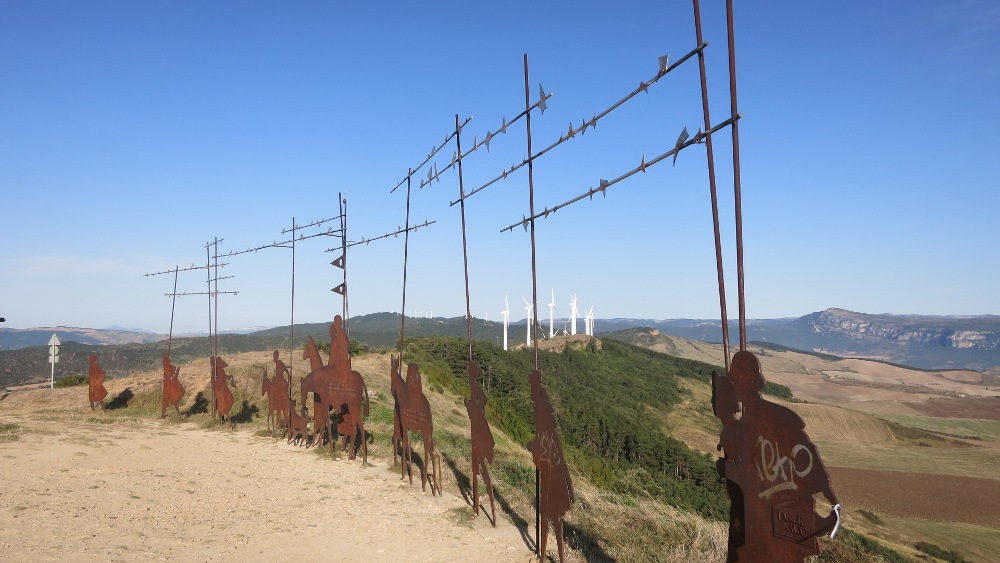 Why are you doing this? The question never seemed far away. I would meet hundreds of people over the coming weeks – here are some of the reasons I heard:

As for me – I had recently returned from South America for my grandmother’s funeral in Paris. The idea of the Camino had been in my head for many years – and now, while I was in France, with time to spare, it  seemed like the perfect moment. The reasons began to change the further along I went – but I’ll save that for another day. 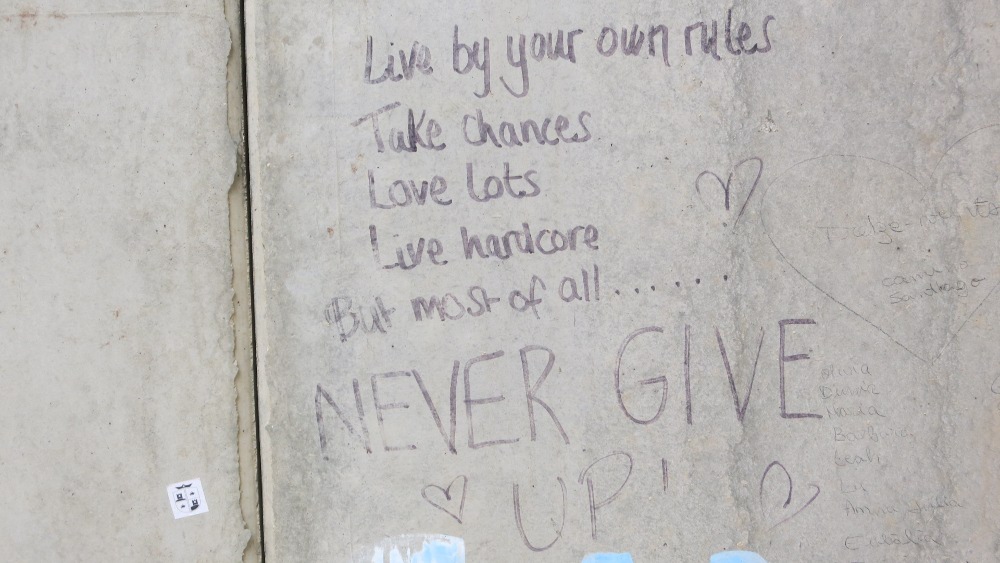 The world  was different here. Life was easier. Each day we rose and followed little yellow arrows, until we grew hungry. Lunch was always simple, in one of the many little cafes or restaurants along the route. In the afternoon we would continue on until  it was time to stop. It was all very simple. The people also were different. There was no place for shyness or reservedness. People opened up quickly, their thoughts and emotions gushing out. Then just like that, they’re gone – you never see them again. One minute you are hunched over the second (or is it third bottle of wine?)  as a new friend regales you with stories of past glories and pains. The next, as everybody wakes, you find the friend now gone.  There is no swapping of email address – or Facebooks. Just two beings whose lives have crossed for the merest of time, and that’s it. That’s enough. You move on.

Muscles began to ache a little less each morning, as our bodies began regulate to the constant walking. Except Nadine, who despite all the will in the world, was struggling badly. 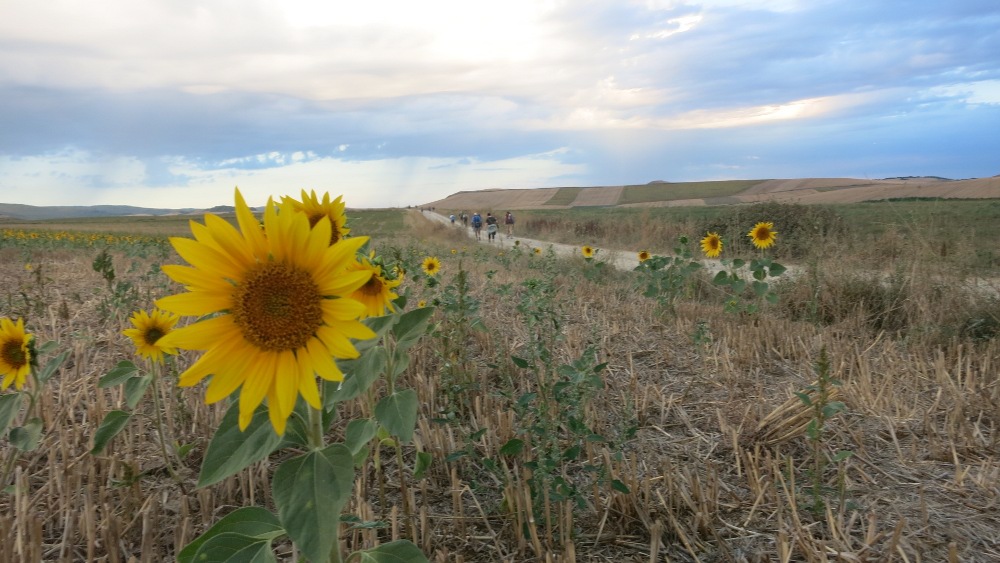 The enigma that was my Lebanese friend deepened by the day. I began to have the distinct feeling she was making up her life as we went along. Her stories would lurch from the fantastical to the frankly science fiction. I began to the get the impression she was a deeply disturbed woman, who was pushing herself to breaking point on this trail.  Things boiled dangerously over one day as we walked the long shadeless stretch between Urbiola and Los Arcos. The heat was overwhelming. Michelle had walked on ahead to secure us a couple of bed. I was left with the weaving Nadine, who had forgone any food that day, choosing the nutritious virtues of beer instead. 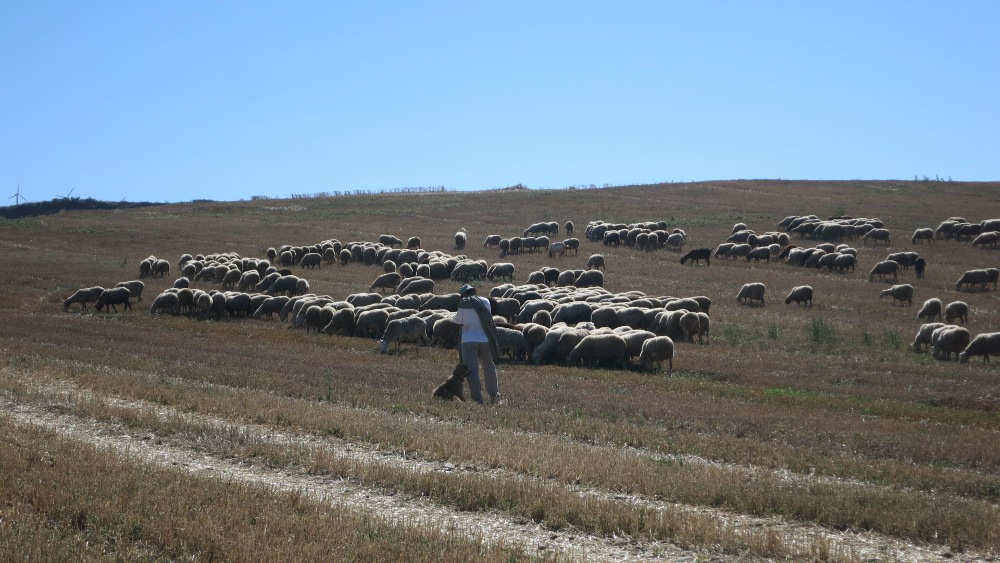 The final nine miles were painful. Occasionally she would berate me, telling me to just leave her there. I would have liked nothing more – but not in that heat, and not in that state. I put my arm around her and half dragged her along, finally staggering into the hostel just after 6pm. Nadine was a wreck and burst into tears as soon as we arrived. 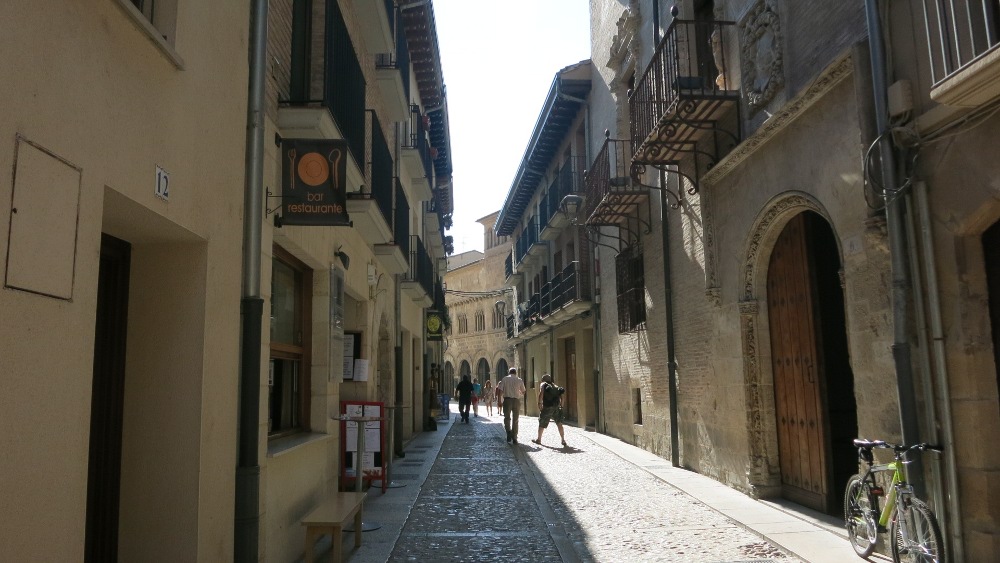 I think it was the final straw. A few days later she disappeared. The last I saw of her was  in the little town of Navarrete. As we packed in the morning she informed us she would catch up with us later in the day. I could tell from her hug, and the look on her face it was a real goodbye. And so it was,  I never saw her again. 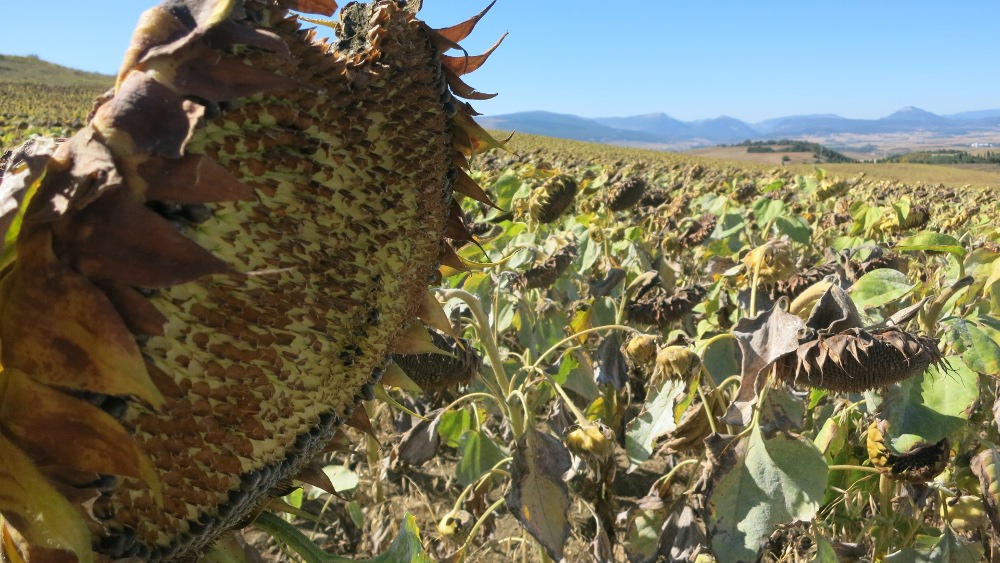 Laura had left after 5 days, and now I also parted ways with Michelle. I was on my own for the first time since the first day. That morning I was on the road by 6.30am. The darkness gradually melting around me as the body slowly woke. In the far distance thunder clattered and lightening tore great jagged lines through the sky. The most spectacular morning of the entire walk – come to think of it I can’t think of too many more spectacular mornings ever in my life.

I felt lighter on my own. I hadn’t realized how much effort it had been to drag Nadine along. I charged invigorated up the hills. On one memorable occasion I reached the summit as Lynard Synard’s Free Bird reached its thunderous crescendo in my headphones. It’s difficult to describe the feeling except to say that at the time it seemed like the single happiest moment of my life. Five minutes later one of the shoulder straps on my bag snapped. I spent the rest of the day walking heavily, and painfully, tilted to the right. Things could change quickly on the Camino. 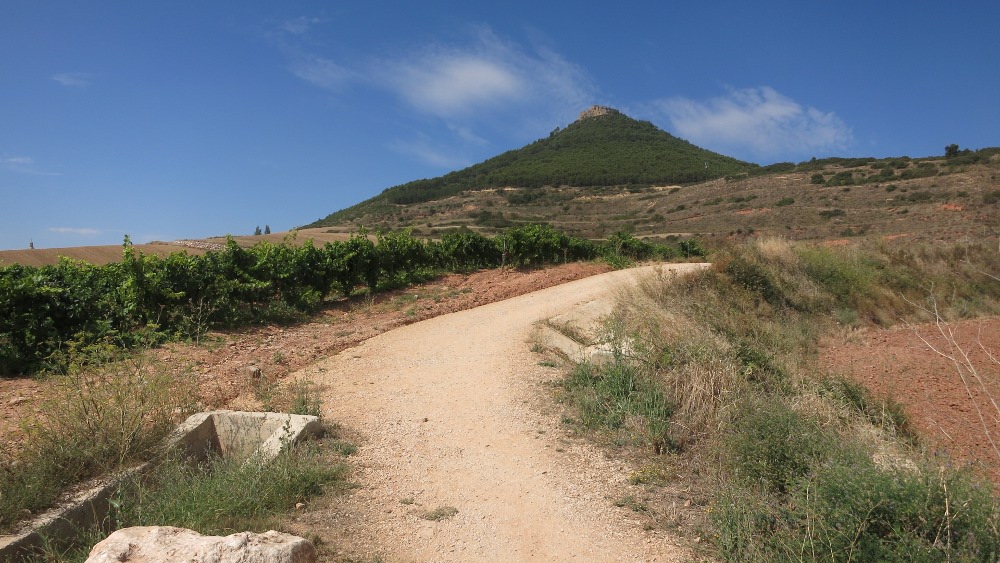 The seasons were changing. The intense heat of the first two weeks was slowly replaced by a mellow autumn warmth. The colours raged disagreement with each other. Luminous greens sat alongside burnt reds.

I walked with an excitable English woman who had taught English in China. A warmhearted middle aged couple from Australia and a mother of three whose accent swung wildly between cockney and an Eastern American drawl. But each never for more than a day.

Burgos was approaching. It would signify the end of the first of three stages, and the start of an area known as the La Meseta – which according to who you spoke to was either an enjoyably empty section, or the place you kill yourself from a mixture of boredom and heat stroke. A dull ache had wormed itself into my right knee and and now hurt with every step. I would take a rest day in the city before tackling it. 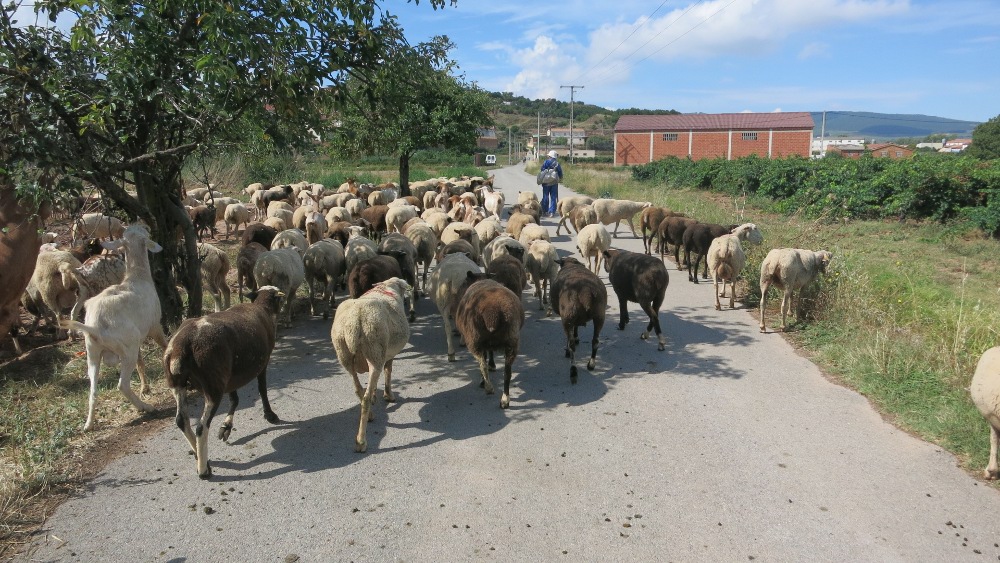 I was now walking with Jessica and Hans, an Irish woman and a German man. The day before Burgos we stopped in a tiny hamlet. Nothing more than twenty houses, but Pilgrims crammed into every available space, surely multiplying the population by thirty fold. There was an excited fizzle in the air. A few of us having a few beers outside quickly swelled to five, then, ten, then fifteen. Then suddenly somebody arrived whose birthday it was, so we all drank a little more. The incredibly odd German woman who I had met six hours earlier, and looked like repressed milk maid (not in a good way) put her hand on my knee, and whispered in garbled English that she thought she might love me. I sobered up immediately and went to bed.

The following day we trudged through the dreary outskirts of the city, past the airport – past the ugly power station and finally onto the eternally long, perfectly straight, tree lined path that ran along the river into the city of Burgos. 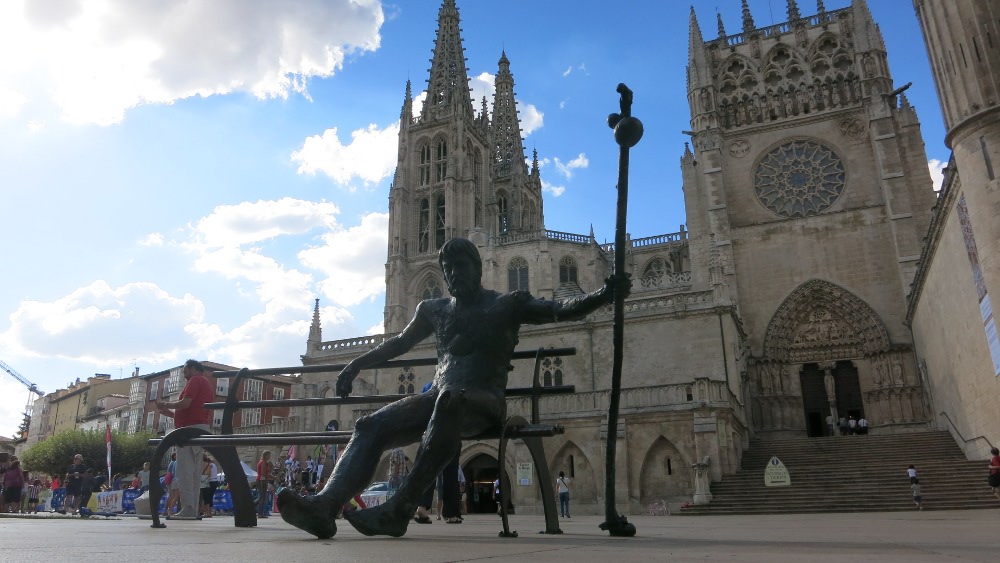